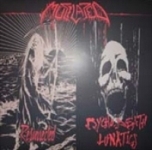 Holy shit it was about time that somebody had the guts and intelligence to release the MUTILATED material on vinyl!!! In these days and age where extreme Metal has become a trend, where barking singing has become the norm, where speed for the sake of speed drumming has became the in thing, where writing riffs without giving a shit about hooks, vibes and coming up with distinguishable songs is considered as dated, it’s always fresh to hear such material simply because that is real extreme Metal!!! Formed out of the ashes of MUTILATOR (who had issued a promising demo in the Speed / Thrash field in 1987), MUTILATED went on to exist for about five years before dislocating and rising again as ABYSSALS during 1994 (another totally killer deathly act). The hostilities opens with their first demo from 1988, "Psychodeath Lunatics", the recording that originally put them on the map, this version contains the four songs that had been originally recorded (‘Cabalistic Cryptograms’ – a reworked MUTILATOR tune – was supposed to appear on a compilation but never did and remained in the vaults until recently). The rifferama offered throughout the whole demo is just totally insane. Mainman Michel "Nonos" Dumas really possessed that ‘thing’ that separates the songwriters from the wannabees. After all MUTILATED were one of the very first extreme acts to ever come out of France – and no boys, I’m not talking about speedy Heavy Metal à la AGRESSOR, LOUDBLAST, MASSACRA – I’m thinking of VIPER, HELLFIRE, UHF, MORSURE here. His writing was just what somebody could expect from a Death / Thrash Metal act, the MORBID ANGEL, POSSESSED influences could be felt but just like IMMOLATION at the same time, MUTILATED kind of had their own sound already. Then the two song demo from 1992 follows which had been recorded with a new line up, long time drummer Jackhammer having been replaced by Guillaume, a second guitarist had been added and bassist Phil taking care of the vocal duties. The band had opted for a total Death sound at this point leaving behind the few Thrash influences from their previous demo. The band simply raged, every single tune could have appeared on a MORBID ANGEL record and shining on it – it was simply that killer!!!! The only not so hot point was the drumming on the very fast parts which sounded kinda weak comparing to, let’s say Burill or Hollingshead and the production didn’t help either as you’re under the impression that he hits a saw instead of the ride cymbal. But this is minor criticism considering the talent displayed here again. And if that’s not enough for you hungry Metalheads, the album ends with the unrealised two song 7" which had been recorded during early 1993 but never issued (‘Evil Scriptures’ and ‘Tormented Creation’), total ripping Death Metal all the way and if proof was again needed, MUTILATED had all the ingredients to become one of the leaders in the Death Metal scene and could have sit along the likes of MORBID ANGEL, POSSESSED, DEATH and OBITUARY. That band was that killer and to this day, nobody else in the French scene has penned Death Metal material this way. You may disagree but that’s the truth and don’t start listing me a bunch of names cos I would disagree. This music has to be understood to be well written / played; using a downtuned guitar, a barking dog and 10 seconds blast beasts doesn’t bring Death Metal. For those who were doubting that I like extreme Metal, then here’s the proof. I immensely enjoy this style, but the difference is that I’m into songs not noise. After all that’s what music is all about, right?! The artwork is also totally cool / professional (featuring the MUTILATOR and MUTILATED demos artwork split in half) and a complete (I mean complete!) biography is also part of the album. A Brazilian bootleg is also around but doesn’t feature the same tracklist / artwork. Of course this album doesn’t have a big distro but try mail orders such as www.hellsheadbangers.com. They will certainly have it in stock! Be warned that only 500 copies have been pressed, so hurry up if you’re a real Death Metaller. You simply can’t live without this (a CD version of the whole stuff would be nice also! – Frank). Let’s hope now that more will be pressed (different soundboard live tapes exist featuring more unrealised stuff and there’s also the totally godly ABYSSALS demo!).