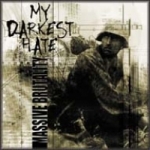 MY DARKEST HATE is a new promising act from Germany. They come up with simple structured but quite effective old school Death Metal in the vein of BOLT THROWER or SIX FEET UNDER. In most cases the musicians behind this band aren’t any strangers anymore as they are involved in a (wellknown) German Power Metal band. Except for the fact that they can obviously handle their instruments (probably because of that) I don’t see any further selling points in this. So I won’t give you any names here (why not? By now everybody is already aware of the fact anyway that this is another outlet of SACRED STEEL musicians – Frank). MY DARKEST HATE concentrate on the midtempo style with some upper and some slower parts and they know how to compose some crushing Death Metal tunes. Massive drums plus a massive string section plus a massive grunting vocalist plus a massive wall of sound result in … a massive brutality! Maybe not the most outstanding release, but who cares? Recommendable.

Related reviews / interviews:
• MY DARKEST HATE - To Whom It May Concern (Stefan Franke)
Back Report errors Print