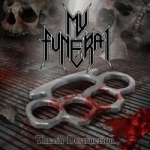 Finnish Thrashers (or Deathrashers?) MY FUNERAL’s debut album saw the light of day in 2010 through Violent Journey Records, and if I can remember correctly that particular record unfortunately left me pretty cold, for exactly not standing out from the pile the way I hoped for. Now, 3 years later, it’s time for MY FUNERAL’s 2nd full-length outing, which turns out to be somewhat drastically better both song – and execution-wise. Perhaps the band even decided to use the album title "Thrash Destruction" sort of as a motto for themselves when sweating blood into the songs of this release – who actually knows. "Thrash Destruction" is definitely a tad better package from these 4 Finns than the band’s debut, "Carnal Obduction". The songs have definitely more Thrash in them, and the old school theme is absorbed into the record much better than last time. Bands like SLAYER and AT THE GATES are those 2 bands that come to mind instantly when spinning this disc around; probably with less hooks and skills, I would say. MY FUNERAL’s vocalist (and bassist) Ilkka Sepponen even deceivingly tends to sound like Tomas Lindberg of AT THE GATES every now and then, which can be considered both as a good and bad thing, I guess. MY FUNERAL’s somewhat straightforward, harsh and even teeny-weeny amateurish Thrash Metal approach is, however, that thing in them that does appeal me in some strange way – and of course for a big fan of SLAYER like I have always been, those SLAYER-ish influences that are pretty much raging all around their songs on "Thrash Destruction", indeed make the album pretty darn entertaining and nicely enjoyable to me after all. Good stuff even if still quite far from any mind-blowing department though. More about these Finnish Thrashers can be found at: www.myfuneral.fi, label: www.violentjourneyrecords.com