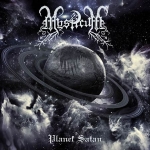 After ten years since their last studio release (the essential compilation "Lost Masters Of The Universe”) the Norwegian trio MYSTICUM finally show a sign of live with this second album "Planet Satan”. The debut  "In The Streams Of Inferno” from 1996 was a strikingly atmospheric album with a mix of traditional Norwegian Black Metal riffing with electronical, militant drumming and industrial samples. Info that’s probably superfluous to you already! This combination of techno coldness in some tracks actually made me prefer different versions, like ‘Kingdom Comes’ on the compilation "Nordic Metal – A Tribute To Euronymous” or ‘Where The Raven Flies’ from the "Piss Off” promo because of their heavier production. But what about "Planet Satan”? What stands out immediately is the production (again). This one is higher and shrillier than on their predecessor from eighteen(!) years ago. As a whole it’s tight as hell and the bass is clearly audible but on the other hand, heaviness is missing. Maybe it’s part of a cosmical concept this album seems to have according to the cover art and some tracknames. Another altered element are the vocals. They used to sound like they were procliamed by a witch. On "Planet Satan” Cerastes and Prime Evil definately sound more low and human. The tempo is overall high and because the drums are upfront in the mix, the hammering of the snare catches off balance and its hard to get carried away by the haunting atmospheric riffing liek we’re used to be. An element that marked their releases in an excellent way. When the speed decreases like in ‘All Must End’ and ‘Far’, there’s room for this again and it shows their class is still there. These heavier techno characteristics were more or less introduced by the compilation version of ‘Black Magic Mushrooms’ and tracks like ‘The Ether’, ‘Fist Of Satan’ and ‘Cosmic Gun’ follow this line. Especially ‘Cosmic Gun’ shows this album in a nutshell; the ancient riffing-quality against a chaotic and mechanical violence of the drums. In some cases this combination succeeds to convince and in others it misses cohesion. Maybe it will eventually grow to an(other) addictive whole, but at this moment and after four spins "Planet Satan” is good but not great. What’s also promising is that Peaceville released this album. For what I know the class label Full Moon Productions that released "Lost Masters Of The Universe” ceased to excist and Peaceville took over the stick, hopefully proven to be a worthy follow up and party to support these guys with the promotion and attention MYSTICUM deserves. For more info, check: www.mysticum.com, www.facebook.com/mysticums, www.peaceville.com