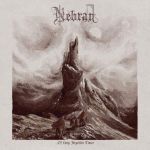 Germany’s NEBRAN is a one-man machine that thankfully sounds like a full band. When there’s so many DSBM ‘bands’ out there that sound like they’re recording in their mother’s basement, it’s a relief when we receive a delivery of well-produced, well-written songs with a full sound. “…Of Long Forgotten Times”, the first full-length release of NEBRAN, is an album of over an hour of atmospheric, dismal tracks that bring the best parts of this genre compacted into a consistent, satisfying, moody piece of work. After the intro, ‘Fugitive From A Fallen Empire Parts I and II” (two tracks) slither and convalesce as A/M’s vocals screech and scream, but not in that annoying BURZUM rip off way that so many one-man guys mimic which sounds like they stepped on a LEGO. ‘Against The Modern World’ is a steady rhythm of despair as ‘Peering Into Darkness’ is a fairly brief segue into ‘Of Long Forgotten Times’ whose opening guitars remind me a little of BATHORY’s ‘A Fine Day To Die’, which isn’t a bad thing. Then it goes its own way after that with a tumultuous amount of emotion and dizziness. Tracks seven and nine are ‘Seclusion Parts I and II”, ambient tracks that gently guide us to the end, and which sandwich ‘The Witch (That Never Existed)’, a pretty damn good track of more atmospheric goodness. The final three tracks on the bonus disc are from demos and a split, and don’t lose any of the consistently in production or feeling that the regular album delivers. It’s rare these days for a depressive Black Metal one-man band to give us such a fulfilling album. Does it provide anything necessarily new in the genre? No, not really. But NEBRAN still gives us a damn solid bit of hopelessness we all struggle with in our lives. And what is good music if not consisting of pure emotion? For more info, check out https://nebran.bandcamp.com, www.facebook.com/vanrecs