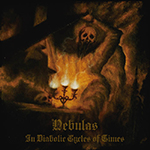 NEBULAS is a Black Metal band / project formed in 2000 by Berlin, Germany based Christian Frost. His discography translates into a promo, an EP and two full albums. “In Diabolic Cycle Of Times” was recorded in Berlin and mastered in the studios of Harris Johns, who also took care of the mixing process. For this album Christian took care of everything that is strings besides the voice and he had a session drummer, the same thing happened with the keyboards. The album begins with an acoustic intro that reminds of IMMORTAL’s debut “Diabolical Fullmoon Mysticism”, and then starts with ‘The Earth’s Burial’, with great work on riffs and vocals. The album is build as a whole in my opinion, where the songs work in a great way in their connection with each other, so mentioning every song would be unnecessary. It is noteworthy that everything is very well produced, without sacrificing the sound. It sounds very organic without any type of overproduction. All the instruments are very well present in the recording. In conclusion, a highly recommended album for all lovers of Black Metal in the old way, without a doubt you will have a great time listening to it. For more information visit https://nebulas-music.bandcamp.com or www.facebook.com/obscureabhorrenceproductions