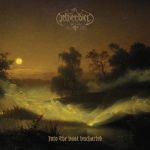 Founded in 2004, Sweden’s NETHERBIRD have just released "Into The Vast Uncharted", their 5th album. And it is not until now that I hear about them. Maybe because I do not usually dwell into melodic and / or symphonic Black Metal. Nevertheless, I have given it some spins and I can say it has grown on me. After the "big bang" of Black Metal in the early / mid 90s, there were some bands that started to blend more melodic elements in their music; mainly DISSECTION. But bands such as UNANIMATED and NAGLFAR come to mind too. So, for me, this was Sweden’s answer to the rawer and more blast beat oriented Norwegian Black Metal. Now, these three bands I used as reference were / are great. Their first albums were amazing, combining Black Metal features with a lot of elements that the average listener was not used to. And this is exactly what I use as a measuring stick, since nowadays, this sub-genre is nothing new and it has been done (and overdone) before. Upon first listen to "Into The Vast Uncharted" one cannot deny that NETHERBIRD has a lot of influences from the aforementioned bands. But they have managed to add their own signature, so their music is not just a copy of a glorious past. Which is something I expected after 4 full length releases. Nephente’s vocals have that typical raspy tone, but also variations and good dynamics that keep them from becoming one dimensional. Music-wise, the fact that they use 3 guitar players (Nord, Jacobsson and Bizmark) gives them a lot of intertwined possibilities, which they use effectively, in my humble opinion; lots of melodic and harmonic lines that work perfectly between them. The softer / acoustic passages are interesting and the song structuring tends to be different from the usual. Micke’s bass and Fredrik’s drums provide a solid and cohesive backbone to all that is happening on top. Production wise, everything sounds great, just like it should. The mix lets every performance shine, since each instrument has its place without interfering with the others. This is really a key feature in a band where you have 3 guitars doing different things in most of the songs. "Into The Vast Uncharted" is a solid album in this melodic / symphonic sub-genre of Black Metal, where NETHERBIRD showcases their maturity as a band. Also, I must say I dig the cover. It is a painting done by August Malmström (1828-1901), a Swedish painter. Support the band here: www.facebook.com/netherbird and get their album from their label here: www.eisenton.de