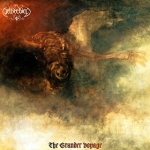 One of the reasons why I wanted to do this review is because of the fact that the only album I heard (and enjoyed) by NETHERBIRD was their first album “The Ghost Collector”. That debut album from this Swedish melodic Black / Death band was a fine discovery back in 2008. I remember ordering a few records from Roy (Pulverised) and I saw the cover and was intrigued. Then I saw some facts of the album saying Adrian Erlandsson (from the mighty AT THE GATES, THE HAUNTED, VALLENFYRE, etc.) was playing on the record, it was a good blend of say… melodic DIMMU BORGIR parts mixed with the Gothenburg sound. Nothing very spectacular but still a solid album. Lots of changes took place, all the members (except the mastermind behind NETHERBIRD) left the band in the following years, got signed by Scarecrow Records to release their next 2 albums which I totally skipped but heard and saw some mixed reviews about them. And now the band is signed by Black Lodge Records and are about to release their 4th record “The Grand Voyage”, so I wanted to know what happened to this band after 8 years of ups and downs in their career. “The Grand Voyage” is a solid album, but a difficult album to digest (at least to me) and here is why. Guitars, bass and keyboards remind me of the mid 90s, early 00s melodic / symphonic Metal that was flooding the “commercial” Metal, but in a good way, the sound is clear and cut through the mix well, making it a modern yet already familiar type of record. Drums are top notch here, I think NETHERBIRD can honestly say they have / had the privilege of get some very well known and talented drummers over the years (right now Fredrik Andersson ex – AMON AMARTH, ex – A CANOROUS QUINTET is the official drummer for the band), and Fredrik Widigs helped to record this latest record (if you don’t know who this guy is you might have been living under a rock for the last years and thus you need to check his works right now!), so the drumming department is great. Now the problem I see with this record are the vocals. I think it’s the weakest link in the band, this time around 3 people are singing all over the record and that makes this “familiar” record to sound odd and weird at the same time, like stepping inside your home you have been living for the last 20 years and one day everything is in another place. It’s all there, but just in other places, that’s the feeling I get when I listen to “The Grand Voyage”. My verdict is that even when I was expecting a better record than this, “The Grand Voyage” saves some elements of those records I kind of enjoyed during the mid 90s and that I used to play in my CD Walkman while I was going for work on a rainy day. Give it a try yourself at www.facebook.com/netherbird, www.blacklodge.se