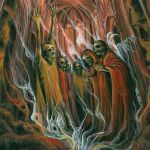 A gargantuan war on Metal between Paraguay and Norway is about to begin as NIDAROS DESECRATION march on with machine gun breath! Nidaros, the ancient name of the city of Trondheim as well as the official appellation of its famous Lutheran cathedral (MAYHEM’s masterpiece cover art, anyone?) represents the conceptual fulcrum of these Asunción based disciples of cruelty. "De Spectris Peccatum" is the second chapter in the band’s filthography right after the "Ocean Of Decay" 2015 cassette tape demo, and it’s a good statement of (malicious) intent. Death Metal minions will find solace in their C-tuned INCANTATION meets ABHORRENCE plus very little AUTOPSY style, but there’s something black in there too, as the song ‘Sacred Putrefaction’ sets in with its slightly VARATHRON-ish synths and ‘Aghori Domain’ descends in a purely sulphureous closing section. By the way, nice 90s inspired digital choirs, guys! The uneven, yet nicely painted album cover befits the music well enough. The vocals swing between scream, growl and the occasional spoken fragment, decently joining with the other instruments in a dark but balanced mix. To whom it may concern: the three fifths of the band play in brutal Deathsters DIAGONAL DE SANGRE and in several other tough Metal factories you might look for at some point in your life. “De Spectris Peccatum” is out on CD via Escafismo Records from Spain and you can shout out at them at www.facebook.com/escafismorecords or get in touch with NIDAROS DESECRATION on Facebook: www.facebook.com/nidaros-desecration-1499771326982486.