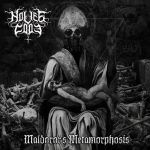 NO LIFE CODE is a rather mysterious entity, known is only the fact that it was formed by J. Nefarious and M. Berserk. “Both well-known members in the extreme State scene, militant in bands like: APOSENTO, ITNUVETH, CULT OF SELLF DESTRUCTION, etc.” states their Facebook page. So the album also doesn’t give out much, the songtitles are romanic numbers only, as in chapters. And the album should be taken as a whole, tracks don’t differ that much – mostly are driven by fast galloping double bass rhythm which occasionaly (as in tracks ‘III’ and ‘VIII’) slow down or go into murderous overdrive as in track ‘VII’. This draped into morose, nihilistic Black Metal riffing and a spiteful delivery of vocals. I like the Death Metal sounding drums and the low bassy tones, they go well together with Black Metal riffery, but on the whole this musical story about Maldoror’s Metamorphosis wears on the monotonic side and demands your full attention, in the end leaving you quite motionless. By that I mean, no full on headbanging, which I need to be evoked when listening to Black / Death Metal. For the true fans of the style, though, really worth checking out. Band contact: www.facebook.com/nolifecode. For CD and tape versions check here: www.facebook.com/deathportal