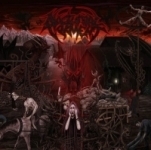 The American band NOCTURNAL TORMENT was born from the ashes of the Thrash Metal band TERMINATION and the Death / Thrash band THANATOPSIS (released a cool demo compilation CD in 2008). Both bands have their origin in the late 80s. So we definitely have no rookies here but some experienced musicians. But other than the aforementioned bands NOCTURNAL TORMENT delivers nothing but furious Death Metal. Their first sign of life was the "Consecrated" demo 2008 which was a rather cool and crushing demo. By the way, all three songs from that demo are also included on "They Come At Night". Though there are some obvious Thrash influences I would describe this album as pure Death Metal. The music is a blend of early 90s Florida stuff such as MALEVOLENT CREATION or MONSTROSITY and some old European bands such as PESTILENCE or HYPOCRISY. I just name those bands to give you an idea of the atmosphere of "They Come At Night". NOCTURNAL TORMENT doesn’t copy any of these Americans, they just create a similar sound and a similar devastating atmosphere. The songwriting is rather varied, the album contains 9 compositions and all of them sound quite different, especially the guitar work is remarkable and crushing. The songs are rather interesting and effectively structured and quite brutal at the same time. The vocals and the production are also great so you should not hesitate to get your fingers on this release. I really enjoy listening to "They Come At Night" and you better believe me, that this is a fine piece of trend free brutal and dark Death Metal and really worth your attention. www.myspace.com/eternalnocturnaltorment, www.deathgasm.com