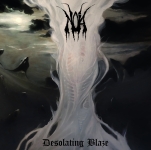 In Italian, Noia means “boredom”. But I can assure you NOIA is anything but. The band has an energy that’s vibrant and abundant, and heavy as hell when it needs to be. There’s a familiarity there that maybe other bands have, but yet NOIA stands on their own at the same time. Six albums in since 2005 (so, pretty consistent) and they continue to satisfy. ‘Desolating Blaze’, also the album title, begins at a fairly slow pace, but then picks up with the grace of a majestic beast. The guitars burn like acid, the drums keep a thundering rhythm and the vocals sound like a gurgling creature that’s smoked without filters for 152 years. ‘Tyrant Of Doom’ is Black Thrash at its best. There’s an almost old school feel to it that just fucking gets the blood pumping. The third track, ‘Eternal Cycles Of Death’, honestly makes me want to ride a motorcycle at 100 miles an hour blindfolded just to see what happens. NOIA has a confidence and attitude that’s pure chaos, and I like it! ‘Primordial Hate’ is very late 80s Metal and simply doesn’t need to offer anything new. It’s fine just the way it is. ‘Disappear Into Nothingness’ has a fuller sound in places that adds additional heaviness to it (as if the album wasn’t heavy enough as it is). It’s mid-paced but the guitars still shred in a waspy way, never settling into one direction. The final track, ‘I Am Not, I Never Was, I Never Will Be’ has more Black Metal than the other tracks, changing it up slightly. Lorenzo Bellia must gargle glass every night with his raspy, blood-curdling vocals. And I thank him for that. If you’ve never listened to NOIA, give them a chance. You’ll throw your neck out headbanging. If you’re familiar, then you already know what to expect. For more info, check out www.facebook.com/noiametal, www.facebook.com/bleedingheartnihilist