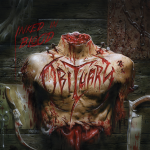 We can actually talk about OBITUARY’s return, as their last full length release with new material came out 5 years ago. Now they’re back, and they refreshed their ranks a little bit: of course the Tardy brothers are still there (no OBITUARY without them, actually), the original guitarist Trevor Peres, plus two new members: Terry Butler on bass (yes, he joined in 2010 but it’s the first studio release with him), and Kenny Andrews on second guitar, who previously supported the band as a touring musician. When the band announced working on a new album, and announced that they will finance it from the crowdfunding campaign, we could read between the lines that it will be an album, that OBITUARY die hards want to hear. And yes, "Inked In Blood" is an album that will satisfy OBITUARY die hard fans. Why? First of all, Tardy’s vocals are as venomous and evil as always, and the album is just wet of those fat, blood dripping riffs. No, they didn’t explore new horizons, they didn’t do a commercial album. They did what they are the best in: they delivered a pure old school Death Metal monster. We could debate about the production of the album, but it’s safe to say the album sounds clear and modern enough to be accepted by younger fans, and at the same time old school and dirty enough to satisfy older maniacs. The first 3 seconds of the opening track ‘Centuries Of Lies’ and you know it’s OBITUARY – hard to find many acts who are that characteristic, especially in Death Metal. Summary? "Inked In Blood" is not only a future classic in the band’s catalog, and their best release for many, many years. It’s also one of the best Death Metal albums of 2014. Welcome back, you bloody bastards! More information: www.facebook.com/obituaryband, www.relapse.com