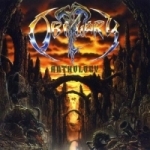 I’m not quite sure who’s supposed to buy this… OBITUARY fans (or let’s just say a lot of Death Metal fans in general) most certainly already own the band’s five studio albums and everyone else probably won’t consider picking up a “best of” compilation by one of the leading bands of this genre anyway, so… Ok, the cover artwork by Andreas Marshall once more is superior and the impact that OBITUARY had on the Death Metal scene undeniable. But to spend a full CD price (as this is unfortunately not being sold for a fan friendly special price) just for three tracks that didn’t appear on the regular albums doesn’t really make a lot of sense to me. Especially not if the ‘212″ Sporadic Mix’ of ‘Boiling Point’ is nothing but annoying, the demo version of ‘Find The Arise’ was previously used on various compilations already and the VENOM cover (‘Buried Alive’) too unspectacular to stand out here. OBITUARY used to be a killer band on “Slowly We Rot” and “Cause Of Death”, but to me they became a little too predictable afterwards and the number of killer songs was always overshadowed by many average fillers on the albums afterwards. So, if you missed out on these guys in the late 80s, early 90s, don’t spend your money on this, but pick up “Slowly We Rot” and “Cause Of Death” instead to experience the real brilliance of these Death Metal masters!