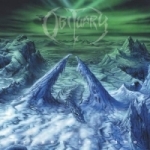 To listen to this latest offering by this (rightly so) legendary Floridian outfit is like to cheer the return of a long gone friend. OBITUARY have stuck to a solid musical formula throughout the years, they have stayed consistent with themselves and their fans. But this time they have gone even farther by unleashing an album of the class of “Slowly We Rot” and “The End Complete”. No doubt that the seven years hiatus in their career rejuvenated the band, because believe me, “Frozen In Time” is nothing less than a magnificent album, fully packed with splendid compositions (no filler here)! While Thomas Gabriel Fischer (previously known as Warrior and despite his efforts to reclaim this sacred pseudonym!) indulges himself in poetic masturbation on his hilarious blog, the OBITUARY dudes simply let the music do the talking; OBITUARY always had a strong early FROST flavour (Trevor, you always get THAT TONE man!) but it is more blatant now on “Frozen In Time” than before. Close your eyes and listen: you could swear hearing the successor of “To Mega Therion”, that said without willing to negate OBITUARY’s own musical contribution and style. To cite only one example, some sections of ‘Mindset’ bring back to mind ‘Jewel Throne’, you can guess how good this sounds! The band and producer Mark Prator have built a huge tower of fat sound, gorged of pure groove. All the OBITUARY trademarks are recognizable as soon as the introductory instrumental ‘Redneck Stomp’ blasts the speakers into oblivion. All the musicians are obviously in fine form to begin with John Tardy whose demented vocals did and still do a lot for the band, even – and this is my only minor criticism – his parts are a little too much put back in the mix. The Watkins / Tardy rhythm section reaches punishing heights in tightness here, like I said before “Frozen In Time” is about groove first and foremost, so, in the classic OBITUARY way, expect only simple but deadly efficient structures. The fast passages are scarce on this album, and always performed at the right time, to relieve the delicious tension brought by the ultra-heavy behemoth riffage courtesy of the classic pair Peres / West. Don’t be led to think that “Frozen In Time” is a sterile exercise of pure nostalgia. OBITUARY deliver EXACTLY what one can expect from them. It takes a sure dose of integrity to refuse to “evolve” and to stay faithful to a particular style, then risking to be labelled as dinosaurs. Dinosaurs, OBITUARY surely are, but frozen in time and surely back “only to reign again” (to quote the CD booklet). So, thanks OBITUARY for this HUGE Death Metal record!