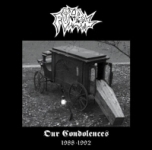 My first encounter with the Norwegian madmen in OLD FUNERAL was when Hammerheart Records released the picture disc "Join The Funeral Procession" back in 1999, a release containing the band’s "Abduction Of Limbs" demo and "Devoured Carcass" EP, a quite nice release that has gotten many spins since then. Now the Dutch label Soulseller Records is ready with a more comprehensive compilation of the early Norwegian Death Metal band’s material, a quite welcomed release as OLD FUNERAL did some good tunes back in the days. The core of the band was Tore Bratseth and Padde (Kolgrim) with additions of Abbath, Demonaz, Varg Vikernes, Jørn Inge Tunsberg and Thorlak during the four years the band existed. The band recorded two demos, an EP and had some liveshows recorded as well, plus some tracks that haven’t seen a release, or at least only seen as very limited releases until this very day. As already written, the band started out with some very primitive Death Metal, especially displayed on the first demo "The Fart That Should Not Be", not the most interesting, nor exciting Death Metal demo, though quite nice to hear and possess as a piece of history. Musically it becomes much better with "Abduction Of Limbs" and "Devoured Carcass". The band starts to weave some good and solid tunes, and the Metal displayed on those two releases are some solid US styled Death Metal with a good touch of their own, some nice energy and a good intensity. The lone track ‘Forced To Be Lost’ recorded in Grieghallen is also a solid proof of good Death Metal. After those releases OLD FUNERAL records four tracks in Kardemommehuset, where the music starts to move from pure Death Metal towards Black Metal and with Padde at the microphone, the growled rasps already starts to sound like, the vocal style which later on evolved fully into what made Abbath and IMMORTAL infamous. Together with some quite insane guitar pieces from Jørn and frantic and pounding drumming, the recording do sound a bit like an early attempt to do IMMORTAL. Musically it’s also quite good and it would have been great to have heard where OLD FUNERAL would have taken it, besides the part that became IMMORTAL. We do also get some live shenanigans on the release, a nice and pro-recorded ‘Devoured Carcass’ and seven tracks from a raw-recorded gig at Garagen, which is very raw and noisy, a good testament of OLD FUNERAL’s live efforts, though a bit fine-tuning of the recording wouldn’t have been that bad, unless you crave raw bootleg recordings, that is. OLD FUNERAL is one of those early bands that did release quite much in a few years, though became overshadowed either by other genres, bands or the bands the members formed, though quite nice that Soulseller has been down in the dusty vaults and have made all this nice material ready for us to indulge in, as OLD FUNERAL deserve their own legacy! More info at: www.myspace.com/oldfuneral, www.myspace.com/oldfuneralmetal, www.soulsellerrecords.com