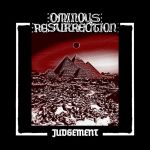 If Black Metal was born in Egypt beneath the reign of Cleopatra, I imagine it would sound similar to “Judgement”. This is an album that is heavy-laden with Folk influences, particularly Middle Eastern. There is a steady use of repetitive (very repetitive) melodies and little-to-no harmony. That’s not to say that the song structure is lacking, the melodies are eery and beautiful, and stick with you long after the album is through; rather, it seems that “Judgement” takes inspiration from Folk music in the pre-harmony days. Go listen to a recording of Nikriz Pesrevi and you’ll see what I’m talking about. Another aspect of “Judgement” that is reminiscent of Middle Eastern Folk is the production. This album has a pretty rough texture and a sound that is rather thin, which is similar to many Middle Eastern instruments. The guitar melodies and playing style can at times remind me of Egyptian violin or Turkish kemence, and it’s no stretch of the imagination to hear, not a drum set, but an assortment of scrap metal and wooden boxes being beaten by various sticks and stones. For those familiar with their previous release, “Omniscient”, this won’t be too much of a surprise, but there’s a pretty big difference in “Judgement”: it’s even more lo-fi. There is a somewhat dizzying quality to the production value here. There is no sense of space and therefore it sounds like the music is coming from inside your own head, rather than from external players. The guitar tone here is especially distorted and creates an interesting atmosphere; not exactly a pleasant one either. This quality, combined with the sweeping Egyptian melodies, can have me feeling like I’m drunkenly swaying down a dark alley in Cairo. So if you’re into lo-fi, dizzyingly repetitive melodies, Ancient Egypt nostalgia, and a relentless, unchanging broken-speaker-distortion, then you are in for a treat! Favorite track: ‘Sons Of Pleiades’. Find OMINOUS RESURRECTION at www.facebook.com/ominous-resurrection-635420263201436. Label contact: www.facebook.com/terraturpossessions