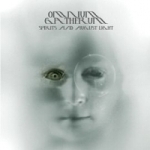 I’m completely lacking in information about this Finnish five piece, but “Spirits And August Light” must be at least their second output, as Ramon already reviewed 2002’s “Steal The Light” mini CD. In one way Mr.Claassen can calm down, the musical level is still very high throughout the entire album, the same goes for the very powerful production. So, I suppose “Spirits And Augst Light” has very good chances to make it on the mainstream market. But all that doesn’t necessarily mean that I really like their melodic form of blackened Death Metal. To me OMNIUM GATHERUM is currently just another band to add to the neverending list of CHILDREN OF BODOM worshippers out there. Their aggressive vocal delivery, mixed with classical inspired guitar leads and the speedy and very Heavy Metal rooted basic songwriting still reminds me too much on what IN FLAMES or CHILDREN OF BODOM already had done a few times before. But not all hope is lost here yet as it’s pretty obvious that the band is trying real hard to become more and more original. In that department some more complex songstructures are worth being mentioned in the same way as their partly incorporated symphonic and rather moody elements. So, if they will develop a bit more from here they might evolve into something way more unique and outstanding in the near future. Their big potential is already more than obvious on this album. For further info check out: www.omniumgatherum.cjb.net. Label contact: www.rageofachilles.com