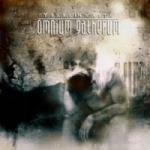 The debut full length from Finnish’s OMNIUM GATHERUM hit the light through the unfortunately deceased British newcomer label Rage of Archilles Records, who also did the brilliant Facebreaker album, too. Well, Nuclear Blast simply caught this band with this second album “Years In Waste”, but honestly spoken I can’t imagine that this five piece will satisfy the sales figures of such a label, cause in some way the material is too progressive. OMNIUM GATHERUM are no easy listening band, cause it takes you a lot more then one turn around to get into their material. They somehow remind me a bit to the very early period of SOILWORK’s first album, which means a more Thrash based riffing, hidden atmosphere and a suddenly thundering blast. Basically you can find a more modern Swedish type of style in their work, but the type of melodies are typical Finnsh, which means more in the vein of NORTHER or BODOM, but not too obvious like a 08/15 copycat. Something I can’t understand by most Finnish acts is the use of keyboards, that also steals some heaviness here as well. Skillwise this band is defintely professional, but I still miss a certain kind of kick and a red line in terms of catchiness a bit. Becoming more direct and thundering to the point would help OMNIUM GATHERUM a lot. The biggest point of criticism is in my opinion the too monotonous vocal work of Antti Flippu who should deliver a much wider range to deliver the right atmosphere and feeling. Well, OMNIUM GATHERUM are a quality band, which generally speaks for the Finnish scene in the same way as the crystal clear Finnvox mixes sound, a matter of taste generally. But to come to the point it’s a band in the better melodical middlefield and I fear that they will disappear the same way on the Nuclear Blast roster like great melodic acts as Withered Beauty, Gardenian etc. did back then. But I defintely hope that they will get a chance for album No.3!!! www.omniumgatherum.org