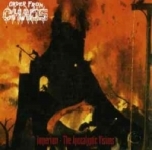 No, unfortunately this ain’t a reunion album by Kansas City based ORDER FROM CHAOS (there probably never will be one!), but part one of a collection of old demo-, rehearsal- and live-tracks. “Imperium – The Apocalyptic Vision” features the band’s second four-song demo “Inhumanities” (from 1988), an eight track rehearsal (from December 25, 1988) and four songs of a live show, recorded in Manassas, Virginia (in March 1994). To tell you the truth, I had quite mixed feelings about this whole project when I heard about its concept for the first time, because even though I usually appreciate demo collections (if done officially), I wouldn’t necessarily consider myself a big fan of releases that get comprised mostly by rehearsal- and live-material… for the simple fact that the sound- / recording quality is often quite poor. But in this case it’s a little different though. If you ever listened to any of the band’s official studio recordings, you will already be aware of the fact that ORDER FROM CHAOS always aimed for a sound that had to be as raw as possible, which complimented their intense, blackened Death / Thrash just perfectly. That in mind, plus the fact that the sound of the rehearsal- and live tunes is above the average on here (especially the live material really kicks some serious ass – just listen to their killer version of SODOM’s ‘Nuctemeron’!), makes the whole disc pretty enjoyable nevertheless. The booklet features a very detailed band history and lots of previously unpublished old bandpictures, while the cover offers us a part of a classic Hieronymus Bosch painting. The vinyl version also has an ORDER FROM CHAOS fanzine included, so watch out for that if you’re a die hard fan of the band or simply not into CDs. I’m personally already looking forward to volume two, which a.o. will feature the ORDER FROM CHAOS three song debut demo, EP b-sides and so on. For ordering information contact www.merciless-records.de