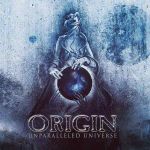 The technical brutal Death Metal champions known as ORIGIN celebrate their twentieth anniversary with "Unparalleled Universe", their seventh full-length. If the previous one, "Omnipresent" has been considered a false step in their career, they are still a “love or hate” band that feed their excited fans with a new chapter every three years while being ignored by most of the old school Deathsters. They really didn’t change their brutal Death Metal since the EP "A Coming Into Existence" and the self-titled debut album on Relapse Records in 2000. Of course, they finished their instrumental skills in a tremendous way, Paul Ryan has not many opponents among the Death Metal shredders, and John Longstreth, that I prefer to remember for his infernal drumming with ANGELCORPSE, is one of the fastest and more extreme drummer in the scene. But, was it possible to produce a more technical album than "Echoes Of Decimation" or above all "Antithesis"? I don’t think so, I believe that they reached their limit on those albums, then they continued with the same formula without excellent outcomes. The new album is surely better than the last one, it starts without introductions with crazy sweep riffs and superhuman double bass drum, ‘Infinitesimal To The Infinite’ is a killer opening track without a doubt. Thereafter, ‘Accident And Error’ and ‘Cascading Failures, Diminishing Returns’ contain the best riffs and ideas of the whole album, in which Longstreth flaunts his dexterity in mixing speed and crazy use of accents with the cymbals. On the other hand, I can’t keep the same attention to the rest of the album. Songs like ‘Mithridatic’ or ‘Invariance Under Transformation’ are nothing special or shocking, while ‘Dajjal’, with some great patterns, is an exception if listened more times before you can fully enjoy it; the long ‘Unequivocal’ recalls the experience of the "Antithesis" titletrack, exceeding it as duration, but flooring, in a negative way, with a melodic progression in the second half. The last track is an enjoyable BRUJERIA cover, ‘Revolucion’, but just if you like the original version. I’m not a brutal Death Metal fan, I stopped to follow all the SUFFOCATION clones after some years of interest, but ORIGIN are an outstanding band in this genre, and "Unparalleled Universe" is a confirmation of that. More info at: www.facebook.com/origin, www.agoniarecords.com