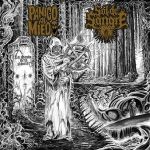 Columbian Death Metal band SOL DE SANGRE teamed up with the Spanish Death / Thrash Metal outfit PÁNICO AL MIEDO for this four track EP. Both bands released their debut in 2018 so they took the chance to keep things rolling with this to 500 CDs limited release. At first I was bit disappointed, because all four tracks (two by each band) are cover tunes of well-known Death Metal classics. SOL DE SANGRE picked ‘Revel In Flesh’ by ENTOMBED and ‘Before The Creation Of Time’ by UNLEASHED (mixed by Tomas Skogsberg, mastered by Dan Swanö), PÁNICO AL MIEDO decided to pay their tribute to DEATH and PESTILENCE by choosing ‘Pull The Plug’ and ‘Twisted Truth’ (mixed by Marc Boria, mastered by Tony Lindgren). But on second glance I recognized the brilliant idea: the lyrics are re-written and performed in the Spanish language! This fact gives the songs a special vibe, since the vocals are sounding more rude and coarse. The music stays close to the originals, but with that little trick to change the language the well-known classic tunes are making a fresh impression. In top there is the magnificent artwork by Juanjo Castellano Rosado. This EP is a successful experiment and both bands convince the listener with their versions of ‘Festín De La Carne’, ‘Antes De La Creación’ ‘Desconéctame’ and ‘Verdad Vil’. www.facebook.com/panicoalmiedo, www.facebook.com/soldesangre, www.war-anthem.de