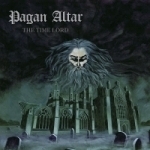 Important note as for starters: "The Time Lord" contains the oldest, historic PAGAN ALTAR recordings that the band has in their archives. They have been digitally transferred from multiple master sources onto compact disc to obtain the best possible reproduction. However, due to the age of the original sources, the compact disc format reveals irregularities. This is the best sounding "The Time Lord" release to date. So there. This 5-track EP was originally released on vinyl (with a different cover artwork) by I Hate Records; a respected Swedish underground label – and since then it was also released by Buried By The Time And Dust Records in January 2012 on the gatefold sleeve vinyl (with a new artwork again), plus Cruzz Del Sur Music in collaboration with Shadow Kingdom Records on CD in 2012, too. This 5-piece Brockley, England based act employs some basic elements of NWOBHM and traditional Doom Metal somewhat successfully, simply keeping their sound in the truest form – and pulling a shadow of mysticism on their very occult and all kinds of magic reeking lyrical approach. PAGAN ALTAR started out in 1978 – and these 5 songs are exactly taken from the band’s earliest period, 1978-79, which can also be heard from the songs that have been included for this release. PAGAN ALTAR’s "The Time Lord" certainly has its moments – and I don’t think I am totally on a side track by stating they have adopted bits and pieces of bands like STEPPENWOLF, BLACK SABBATH and LED ZEPPELIN into their own, strongly thematically occult and sci-fi NWOBHM / proto Doom Metal. Looking at this from many angles, their stuff does have something very fascinating yet captivating in it; being it that typical, warm, honest and authentic 70s vibe in their sound – or just the band’s mystic aura that seems to surround them nowadays. For what this is – a nicely played, Doom Metal tinged NWOBHM mastery from the early times, it’s all good but no really that earth-shattering by any means that would raise PAGAN ALTAR somehow above other bands of the similar ink, for their ultimate superiority. More about PAGAN ALTAR at: www.paganaltar.co.uk, label info can be found at: www.shadowkingdomrecords.com