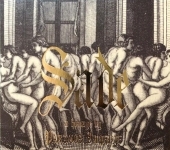 It’s been thirteen years since Belgium’s PARAGON IMPURE have released a new album. On the other hand, the members of the band have been busy with their other project LUGUBRUM. So fans have at least had a fairly steady flow of new music in between. However, sometimes space between albums of this many years can cause bands to play it safe, or tame themselves. Not in the case of "Sade" though. The band has the energy of a phoenix rising from the ashes to wreak havoc once again. ‘Introduction To The Divine Marquis’ opens the album with a mid-paced, yet powerful delivery. Noctiz’ guitars and vocals buzz and flay like a swarm of angry wasps. ‘Juliette, Queen Of Vice’ is a faster, more aggressive track that destroys any doubts that the band has lost their touch over the years. Noctiz bellows, "I want to murder the oppressors of nature and smother the name of god. I want to take the whole world to my bed and set it on fire!". The anger lingers into the third track ‘Mors In Excelsis Deo’ with a wall of guitars, smashing drums and gurgling, monstrous vocals. ‘Repentance Of A Dying Libertine’, with its blastbeats and old school Black Metal guitars doesn’t necessarily deliver anything new, but manages to deliver it with dominance. And then there’s ‘Philosophy In the Bedroom’… An odd title, but one that blasts forward a little after the song begins to create an atmosphere of uneasiness. The album ends with ‘The Final Passion, Or The Passion Of Hell’, which starts slow but builds into a crescendo of epic proportions that simply kicks ass once it gets going. Overall, "Sade" is a consistent, chaotic, Black Metal victory. With the exception of a couple of unnecessary spoken word moments between tracks, PARAGON IMPURE are proof that the band still has its energy and talent after all these years. Here’s hoping it’s not another thirteen years between albums. For more information, check out www.facebook.com/paragonimpure, www.van-records.de