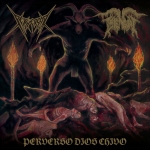 It is not a great secret anymore if I tell you about the Chilean extreme Metal scene as an insider’s tip. Too much fine bands from that country are around meanwhile to talk about inside information here. So I come to the point soon with two bands from the capital Santiago who teamed up for an independent joint venture with the split album “Perverso Dios Chivo”. Both PERVERSOR and ISTENGOAT are around for quite a while now and released some stuff since, yet I haven’t heard of them before this record. Especially PERVERSOR might be known a little better, due to two albums, a few EPs and split releases on dedicated underground labels. And the four piece opens up “Perverso Dios Chivo” with four rude and blackened crunchers on the edge of Thrash and Death Metal. Friends of old school stuff will surely love songs like ‘Abominación’ or ‘Cloaca’, since they feed the need for up tempo, no-frills-or-shit extreme Metal to the fullest. Expect no musical revolution or a polished sound but stuff that will make start to bang your head and thrash your room. PERVERSOR is a name that should get on your list as well as it got on mine. Their musical partners in crime on “Perverso Dios Chivo”, ISTENGOAT, have a different thrust. Completely anchored in Death Metal, the quartet already released an album and an EP yet, with the four brand new songs on “Perverso Dios Chivo” being their latest output. And these songs refuse to be filed under a certain metallic subgenre. You find ideas, riffs and harmonies from all eras and movements of Death Metal. Sometimes I feel reminded of MORBID ANGEL, only seconds later I think of Swedish Death and then it’s INCANTATION to come to mind. Elements of Gothenburg Death Metal (‘Leviathan’), some continental European riffing and blastbeats close to early Grindcore top this pretty unique blend off. Add a brutal production and you get another fine example of Death Metal from Chile with ISTENGOAT. You can check the album out here. In case you need more information on the bands, visit PERVEROR at: www.facebook.com/perversorcultofdestruction and ISTENGOAT at: http://istengoat.atspace.cc