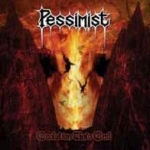 Formed back in 1993, PESSIMIST is no newcomer to the scene. I have already heard some albums like “Cult Of The Initiated” and “Slaughtering The Faithful”, and although this is a compilation that ranges from many eras, shows were this band comes from. First of all we have nothing less than 4 covers from KREATOR, MEGADETH, DEATH and POSSESSED. I don’t think I can find any MEGADETH sound in their music, but the others are a good reference, I will also add that their sound more than once reminded me to VADER, many DEICIDE parts and some SLAYER is to be found. PESSIMIST belong to the kind of American Death Metal that has not that much in common with the style of the Tri-state, but it does neither sound Floridian. There is more than a European flavor on all of it. On one hand it tries hard to sound different, but on the other it just lacks something. I am only speaking of their original compositions, although they give a very personal touch to the covers (specially the DEATH and MEGADETH covers), thus at times they do not sound like a cover after all, as they are adapted to their own style. The recording is very competent, although I have the feeling that there was more than one session involved in all the material herein contained, so some songs sound a bit different in equalization than others. Some songs even do sound more like a recorded rehearsal than a proper studio session. The band members are quite capable in their instruments, and my main complain will be with their vocalist that usually sticks with the low guttural vocals (not as frog-noise, certainly, but very generic, yes). Still, after 3 full length albums, their own compositions lack a certain approach to become interesting to the more veteran ear. Yes, it is pure Death Metal, but it also sounds quite often too generic. After a couple more listens, I also find that the overall guitar tone lack a high pitched attack and keeps it almost in a mid-treble sound like in “Cult Of The Initiated”, taking away a lot of power. Songs like ‘Tunnel Rats’ do have a better guitar sound, yet in those it is where I can appreciate more the way they compose and it only reaffirms the fact that although talented, sometimes they go nowhere and songs sound without cohesion, just like a running wild technical Death Metal band. This version also contains an interactive part, so in all it can be seen as a fans-only release. Otherwise, I would suggest to first check it out, and besides being a good way to know about the band, there are still countless other releases far better than this one. They do have the potential to create something better, but as it is, it is just an average release. www.pessimist.com, www.deathgasm.com