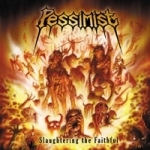 I was made aware of PESSIMIST’s very existence only one year ago, thanks to a link I found on the MORBID ANGEL website. I discovered then that the band had already two albums under their belts, namely “Cult Of The Initiated” (1997) and “Blood For The Gods” (1999), both on Lost Disciple Records. I bought these two without delay, to then find myself deeply impressed by their fine brand of brutal Death Metal with a devilish twist. But as good as these two releases can be (check them out by the way), they are nothing compared to the brilliance of “Slaughtering The Faithful”. This new album introduces a totally revamped line-up, with main man, founding member and guitarist Kelly McLauchlin appearing here as the only survivor of the PESSIMIST of old. Such a drastic change could have killed the band for good, but it has a totally opposite effect really, PESSIMIST coming through this trial only to become even stronger. Combining the insane aggression of such acts as KRISIUN, REBAELLIUN, HATE ETERNAL and DIABOLIC, while keeping their own identity, PESSIMIST belong to the very elite of Death Metal now. The band sounds tight with ultra-precise surgical riffing, the guitars buzz like amplified demented insects, and I am not even talking about the drumming parts delivered with stunning frenzy and total mastering, almost inhuman! In fact, listening to “Slaughtering The Faithful” may induce a sort of hypnotic trance, and I found myself totally disconnecting from the surrounding reality all the while I have been exposed to the attack of this venomous monster. The highly-dynamic production (courtesy of PESSIMIST supporter Erik Rutan), while being powerful, gives little room to each of the instruments, but far from being a flaw here this only adds to the lethal hammer-like effect the album could produces on the brain. Gone are the DEICIDE-like screams that you could hear at times on both the previous releases, expect a guttural-only (and nevertheless understandable) rendition by new vocalist / bassist Ralph Runyan. “Slaughtering The Faithful” is no less than a metallic holocaust, I even prefer this to the yet excellent “Vengeance Ascending” album by DIABOLIC, and it is vastly superior to the somewhat disappointing latest releases by both KRISIUN and REBAELLIUN. A classic album if you ask me, and I see PESSIMIST becoming HUGE in a very near future. I suppose that you know now what you have to do, choose to ignore this at your own risk! AWESOME (AND I MEAN THIS)!!!