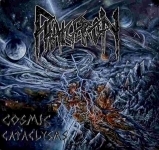 Us humans tend to adore a word so much that we overuse it to the point of meaninglessness. "Epic" is one that I’m reluctant to add to this list, yet every time I hear it used to describe a hamburger or something, I can’t help but wish we’d take it back to old days when we used to describe actual moments of awe or perhaps we could take it even further back to, say, the Epic of Gilgamesh? I think about this each time I hear music described as "Epic Metal". There are certain bands that warrant the distinction; sure, it might just be a "feeling", like when you drag your ass out of civilization every once in a while and stand in front of a mountain or something and find yourself suddenly dwarfed by nature’s "majesty". But alternatively, you must consider epic, the noun; a tale of a full life, one’s trials and tribulations, the rise and fall of kings or what have you. An epic is a story set along the backdrop of history, of both fantasy and reality. PHALGERON seeks to embody both the adjective and the noun. With subject matter such as demons and ancient polytheism, they become more like heavy troubadours weaving tales at breakneck speed featuring powerful riffs of many varieties; many flutter beautifully upwards guiding the song through its paces while others soar through moments of clarity and resolution. Both Lane Storli and Tyler Splurgis provide the vocals and offer contrasting pitches used both independently and for two-part growling harmonies. The production is clean and the sound is exceptionally huge (notice how I am avoiding using epic…) where in a strange way it feels operatic to me. A good example of this is ‘Norloxus The Bloodsmoker’, which has brief spoken word moments punctuating the mythos of a bloodthirsty half-demon. If we started doing things right from now on, it would be one the stories to tell subsequent generations in the oral tradition in order to scare kids into going to bed on time or something. Apart from the stories, there is an overall descriptiveness in their sound. The interludes in ‘Gods Of The Godless’ stand out to me as well as they are visual and almost illustrative. You shouldn’t find this alienating if you’re not into the fantasy stuff; their overall aesthetic is quite fast, technical and has elements of Black Metal providing some of the grit. It’s a meticulous and complete effort from this this Seattle three-piece; I may go as far as to call it "epic" and I’m really mean it this time… www.facebook.com/phalgeron, http://phalgeron.bandcamp.com