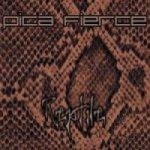 With the release of “Reptile” these Norwegian Thrashers have already put out their third promo / demo / mini CD (call it what you want)… and I don’t really understand the actual intention behind it. I mean, instead of putting out material little by little I personally would have preferred one full length instead – no matter if it’s a self-financed or label release. But maybe it’s just a matter of (recording) money or they somehow prefer to stick to the old school “rules” of the underground by spreading a couple of demos to establish the band’s name a bit more before their real debut full length is going to see the light of day. Or is it simply lack of label interest? Who knows… Fact is, that the three new tunes on “Reptile” are pretty much in the same vein as on their previous releases, which means you’re about to hear rather technical (yet not too complicated) thrashy Metal, with several (late) DEATH overtones and an aggressive Petrozza / late CARCASS style vocal delivery. This time I even spotted some METALLICA riffing (“And Justice…” period, but more rough edged) and rather annoying “oh-hooo” backings in the closing track ‘The Weight Of Condemnation’ (better to avoid in the future). But all in all you can also order this one if you already own and enjoyed their previous offerings (“Reptile” even features a video of the titletrack). Check out www.picafierce.com for all further info or contact the band via email for ordering info at: picafierce@picafierce.com