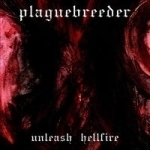 Born out of the ashes of AVAFROST in 2010, Finnish Black / Death patrol PLAGUEBREEDER has unleashed their 2nd 3-track demo recording titled "Unleash Hellfire", which is actually a surprisingly good and well done effort from these four horsemen of apocalypse. I mean, both the songs and the production on this demo reek some sort of professionalism and dedication to the last degree. 3 out of the 4 members also share their time with some other Finnish extreme Metal bands (MMD, NECROPSY and INFERIA that are), so the past – as well as present experience should speak for itself. To me, PLAGUEBREEDER sound like a cross between DESTRÖYER 666’s finesse in an unmatched evilness and brutality, IMPALED NAZARENE’s nastiness in perversion, NAGLFAR’s sense in creating cold musical atmospheres and KRISIUN’ blast beat glorification in the drum department – well, at least sort of. These Finnish corpsepaint-covered extreme Metal warriors have carefully put their songs together for "Unleash Hellfire", counting on a certain diversity of their Black / Death Metal approach, succeeding at thrilling its listeners more than just occasionally. In fact, honestly it could be said that it’s kind of surprising to realize they haven’t been signed to any label yet. I mean, PLAGUEBREEDER have all that potential in them what it takes to impress label owners – and I guess it’s only a matter of time when someone gets into their stuff, and signs this very promising Finnish Black / Death Metal combatant force. Absolutely worth checking. www.facebook.com/plaguebreeder, www.myspace.com/plaguebreeder