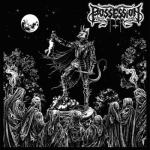 POSSESSION is a rather new Belgian horde, risen out of the ashes of DAWN OF CRUCIFIXION, a blackened thrashing monster that released a couple of cool demos before an untimely demise, as screamer V. Viriakh left the band to get a little more into the pit of Black Metal with POSSESSION. Bassist / guitarist I. Dveikus followed and is handling the guitars in POSSESSION. The band released the rather great demo "His Best Deceit" in 2013, and the Black Metal underground has hailed the band ever since. They followed with the 7" EP "Anneliese", which is attached as a bonus to this CD version, released by Invictus Productions, of "1585 – 1646" (the LP version is being released by Iron Bonehead Productions and contains four tracks). This release shows a bit more mature and well weighed version of the band, a quite natural progression one might say, though haven’t we all heard about a band or two who stagnated along the way? The music has become a tad more complex, though still with some heavy and catchy thrashy main riffs, that takes us back to the heydays of Black Metal and a bit further to the second waves coming, when a few hordes lurked out from the underground in Switzerland, Brazil, Norway, Sweden, USA and so forth. Raw, relentless and merging early Metal and Punk influences into a hardhitting and vicious attack. We start out with the instrumental intro ‘Obscurity’ that is tied tightly together with ‘Visitation’, 9 minutes of furious Black Metal with a thrashing edge, fierce guitar riffs, thunderous drumming and an insane vocal effort. The nuances and shifts are many, the main atmosphere holds tight throughout the track, and some nice loops with the main riff, together with a killer solo and nice quirks. "1585 – 1646" is a well written and performed aggressive piece of Black Metal with the inspiration rooted well back in time, though still with a fresh and ‘we don’t give a fuck’ approach to things. And damn, the break in ‘Guilty’ where it becomes arcane DARKTHRONE worship, beautiful, such makes me a happy old grumpy man! The inclusion of the "Anneliese" EP, originally released as a co-release between Invictus and Iron Bonehead is a nice gesture to those not into vinyl, as it is a fine piece of Black Metal. Especially the titletrack’s atmosphere and progression send chills down my spine. Well, I think this release should be on the shelves of all fans of Black Metal, as it is quite well done and -delivered. These guys have been hailed as one of the saviours of the genre, and with this release they have sealed that fate, this is too good to be left untouched. More information can be found under the shadow of the horns: www.possessionrealm.com, www.facebook.com/hisbestdeceit, www.invictusproductions.net