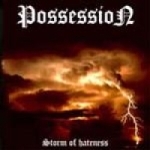 The Austrian / Bavarian Death Metal horde POSSESSION was founded in 2001 and was pretty fast in composing and releasing their material on the MCD “Storm Of Hateness” (I think there’s no word like “hateness”). One can recognise strong influences by bands like BOLT THROWER (e.g. in ‘Burn Them All’), SIX FEET UNDER or old DEMIGOD (especially the vocals), which puts POSSESSION in the mainly mid-tempo old school Death Metal section. There’s certainly nothing original to be found here and if I’m really strict I would say that the songwriting needs to be improved here and there, because a song like ‘Night Of The Living Dead’ is really a bit trivial and lacks of passion and drive, both things I think of being essential for good Death Metal. POSSESSION have one problem: they are too ordinary to stand apart from the mass and I recommend that the four Death Metal heads try to increase their emotional intensity and aggression, because “Storm Of Hateness” is a bit too harmless to be convincing. Remember: groove is not everything! But anyway despite my harsh words check out the MP3’s POSSESSION posted on their really nice website www.possession.at and find out for yourself!