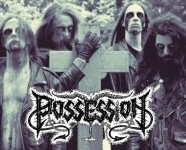 Belgium’s POSSESSION is one of the countless fresh and evil hordes who refer to the old school of Black and Thrash Metal, back in the days when these subgenres weren’t exactly defined and divided. And their effort to fill this old fashioned (and still so brilliant) music with new and fresh life (or death) is a really fine one. "His Best Deceit" is the first offering of this four-piece, recorded not even a year after their formation. Originally released as a demo tape by Iron Bonehead, Invictus Productions released this tape on CD as well. The EP contains three original POSSESSION songs that remind of early SODOM or SEPULTURA, as far as the spirit is concerned, but played way better and with a optimized, yet refreshingly raw production. Shrieks of terror and possession open up for the first track, the band anthem (if you’d like to use this term) ‘Possession’. The slower, grooving intro is just leading you astray, the deadly Thrash soon starts to take over. Yet, the slower middle part even shows some refreshing Death Metal hints and possessed vocals. The following ‘The Truth Of Cain’ has a little more of early Metal of Death, sometimes MASTER come to mind, or the almighty POSSESSED. It’s no wonder that POSSESSION’s logo reminds of the first logo of these old heroes… The last own composition on "His Best Deceit" is the rabid title track, another reviving Thrasher with a black heart. Finally we find POSSESSION’s version of an old classic: ‘Necromancer’, originally recorded by SEPULTURA for their first release ever, the legendary split with OVERDOSE. Of course the cover version is technically better, yet it doesn’t lack the spirit. Taking into comparison that the band is around for not even a year now, this EP is a very fine debut that makes a lot of promises for further releases. This band is not that much a band with ambitions, but a band with a mission. Part one is fulfilled successfully with "His Best deceit". Check the band: www.possessionrealm.com or www.facebook.com/hisbestdeceit. And check the label, too: www.invictusproductions.net 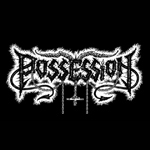 POSSESSION might be a new band, but by no means does this outfit consist of newcomers. Passion and dedication are driving the hellish force of the 4 possessed ghouls, hammering a pretty well executed mix of Black and Death Metal. The whole thing is good, not only because of the sound (mixed and mastered by Phorgath from ENTHRONED at the Blackout Multimedia Studio), but because the 3 tracks, introduced by demonic shrieks of the devil haunted Anneliese Michel, is very mature. Of course influences are pretty easy to trace. Hints of ARCHGOAT, NIFELHEIM, OBSCURITY, KATHARSIS, IMPALED NAZARENE are reminiscent every now and then. But above all what distinguishes this demo from countless of useless retro acts, is that POSSESSION sounds fresh, authentic and nothing is forced or overdone there. These guys know their roots and while they remain in the tradition, they manage to remain spontaneous and hateful enough to be convincing for my well trained ears. The riffs are good and rooted in the twisted style of old DESTRUCTION / NIFELHEIM / PENTACLE, and the songs flow very naturally. The drums are aggressive, strong and pounding, coupled with a great heavy bass sound, and offer a very solid rhythmic that does not lack of “groove”. When I use the word “groove” attached to a blackening Death Metal outfit, I am referring to bands like BOLT THROWER, KRYPTS, DEMIGOD. Something utterly devastating that forces the neck to bang until the eyes pop out of the head! And the vocals are definitely a pleasure to listen to. If you are into UNGOD, KATHARSIS and NIFELHEIM, then POSSESSION might definitely appeal to you, because the voice has the right aggressive and hateful feel you need when listening to such powerful and evil music. Add to the whole thing a SEPULTURA cover ( ‘Necromancer’), played with the guts, and you get a very honest, decent and strong first effort for a band that deserves gain a good exposure and respect among the mass of putrid die hard craving for more sincere noise. Watch out for the full moon on November 17, 2013. The band shall unleash this vile beast of sonic abomination through Invictus Productions on CD and through Iron Bonehead Records for the 666 tapes of apocalypse. https://soundcloud.com/the-true-possession/his-best-deceit