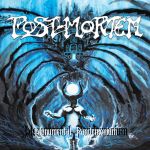 French outfit POST-MORTEM (kinda cliché for a band name in my humble opinion) has released two EPs and their debut album back in 2016. Fast forward six years and they give us their sophomore album “The Monumental Pandemonium”. I cannot comment on their development, but if any of their past music is as relentless and furious as “The Monumental Pandemonium” I will be looking at their back catalogue for sure. First off, the guitar tone is absolutely massive! I really don’t know how you can achieve such a defined yet raw and in your face sound. Both guitar players, Samuel Clauss and Jack Ruetsch pummel the listener with a mix of heavy as hell, yet melodic, palm muted and tremolo riffs. Add to that some well executed leads and the guitar department is covered. I also dig the drums. Although I think the kick is sampled, the other drums have a natural sound that adds to the organicness of the album. Laurent Greder is a machine behind the kit. He also knows when to take a step back and let parts breathe and groove. Pierre Mohn’s pummeling bass performance is the perfect fit between the guitars and the drums. He keeps everything tight and solid. His distorted bass tone helps the guitars and drums in creating a huge wall of sound in both the fast and slow parts. Last, but definitely not least, Xavier Schreiber tops it all with his deep, expressive vocals. His multi-dimensional approach to the vocal parts, mixing in some mid-pitched screams in between is only topped by his exact almost effortless phrasing. The mix is well balanced and defined. You can listen to every single part, even when the songs get fast (and they do often). The mastering is a bit over the top for me (me being an old ogre that prefers dynamics over brick walls) since the listening became a bit tiring after the second spin. But “The Monumental Pandemonium” offers a lot of variation. I can also listen to a bunch of influences such as IMMOLATION, (old) SUFFOCATION and also (new) DECAPITATED and (new) VADER too. Overall, I can say that these guys are top-notch musicians playing aggressive, heavy and technical Death Metal. Now personally, I skipped the song ‘Soul Inquisitor” after the first listen. That was an oddball in this otherwise brilliant album. You can find more info on the band here: www.facebook.com/postmortem68500. Label contact: www.facebook.com/greatdanerecords