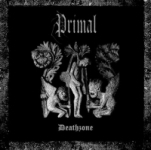 I was first introduced to the Polish sonic force PRIMAL when I reviewed the "Chapel Of Fear" split for this very site last fall. That was a quite dubious release with some good moments, and some rather mediocre. PRIMAL’s offering was a good split of good deeds and some quite dull elements. PRIMAL is attacking us with doomy Black Metal with some Heavy Metal infused. The base of the music is quite off the mill Black Metal, Primal One doesn’t bring anything new to the table. In between the grim darkness we have a heavy doomy atmosphere, that isn’t quite worked through, so it often falls a bit to the ground. Intertwined into the ménage we once in a while get some quite good melodic Heavy Metal leads, though again not always fitting for the atmosphere, and that is quite a shame, as it could have worked out great, if the base was a bit more worked through. The best part of the release is the vocals, a grumpy rasp, even though it lacks a bit of force and intensity here and there. There are some good ideas and some good moments scattered around this album, though too much of what is presented here is too mediocre to become interesting. Together with the quite dull programmed drums, the stale production and the lack of an intense evil and cold atmosphere it just doesn’t clear the cut. PRIMAL might become a good band within a couple of years, though right now it lacks some brute force and focus to compete. www.reverbnation.com/theprimal and www.qevproductions.dbv.pl