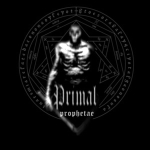 PRIMAL from Warsaw in Poland is a one-man project active in the underground since 2008 already and mastermind PrimalOne has released five full-length albums, two EPs and one split so far, so he was very active in that time. His fourth album "Prophetae" was released via The End Of Time Records already in august 2013 and consists of five overlong tracks of ambient Black Metal with a running time of over fifty minutes in total. The fundament of his sound is Black Metal in medium speed, presented in an ambient interpretation of this style with influences of Doom / Death or Funeral Doom and Suicidal Black Metal. The sound lives from its dark and menacing atmosphere and in the slower parts, PrimalOne really tortures his listeners and manages to transport the pain he feels into his sound. What differs from other groups are his vocals, which are not the typical Black Metal screams, but mainly a distorted voice, very menacing and dark. The voice could vary a bit more but anyway differs from other projects. The riffs are presented in a simple but effective way, blowing your mind by sounding very dark and heavy. As this is the first album, I listen to from his project, the material is not bad at all but the length of the tracks sometimes make him losing the common theme. I would have preferred a repeating theme over the tracks not to lose the direction. But technical wise all instruments are played in a perfect way and if the drums are not a computer, he has delivered a very good job on all instruments. As this style is not my first choice of Metal, I still must admid, that I was caught by the dark and gloomy atmosphere and enjoyed this album. Also the use of keyboards, bells and different other sounds, helped the album not to get too gloomy or boring. Fans of the mentioned genres should give this project a listen via: http://primalband.bandcamp.com. The label can be contacted via the following email address: theendoftimerecords@gmail.com