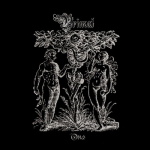 PRIMAL is a one man Black Metal machine from Warsaw, Poland. PrimalOne, one and solely member of the band has been steadily releasing material since 2008. “Obłęd” (Madness) is his 2012 album, released by The End Of Time Records. Since PrimalOne has total control of both, the musical aspect and lyrical content, his orthodox approach comes through easily. Rooted deeply in an almost hypnotic style, the influence from first and some second generation Black Metal is obvious. Some names popped up in my head: PROFANATICA, early MORRIGAN and early COUNTESS. But luckily PRIMAL is no copycat of any of these bands. For sure, this album is heavier and denser. The Polish lyrics didn’t help me understand the concept behind the album, but the music is haunting and played with such conviction that sometimes the vocal performance just seems part of the trance set by PrimalOne. Production wise, this is raw. Don’t get me wrong, it is not your regular thin and pretentious lo-fi “kvlt” sound. The guitars have a thick tone that dominate the mix. Meanwhile, the drums pound their way into the 6 songs of “Obłęd”, although I think they could’ve been a little more present. As for the bass guitar, it mostly follows the guitar riffs and patterns. And the vocals vary between high and low pitched grunts. Overall, if you are a follower of the orthodox styles of Black Metal, PRIMAL should be right up your alley! Since this album, PrimalOne has released two more albums, “Prophetae” (2013) and “Muzyka Żałobna” (2014). More music and all the info on PRIMAL can be found here: http://primalband.bandcamp.com. Or you can contact the label here: theendoftimerecords@gmail.com