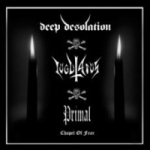 Quid Est Veritas Productions has just thrown this split CD with 3 Polish bands on the streets, an album that brings us 3 takes from the Polish Black Metal scene as it seems right now, especially around Lodz as both IUGULATUS and DEEP DESOLATION are from around that area, I’m not totally sure about where in Poland PRIMAL hails from. And when speaking of PRIMAL, the band that starts out on this split release, I’ve had a hard time figuring out what I think of the music. The overall delivery is good, PRIMAL is the bringer of apocalyptic Black Metal with a doomy and darker than dark edge. Vocally PrimalOne, the sole member of the band, is doing good, a nice low and eerie gasp with intensity and despair. The subtle use of keys on the tracks are also a good boost of the scary and doomy atmosphere, and works really well. The riffing is decent and effective, off the mill, but it works and is dark and eerie, most of the way through. Some of the songs are dragging a bit too much out, and the drum machine is a tad annoying here and there, though the overall impression PRIMAL leaves are positive. The most proved band on this release is IUGULATUS, they have the skills to craft a lasting and hard hitting tune. They are not delivering the most original Black Metal out there, though a good slap of dark Death Metal infested malignancy. Dark rasping riffs drive the songs forward, in the mix we have some good catchy to disturbing melodies and a great lead or two. Mostly IUGULATUS are trampling forward midpaced, though slows it further down or speeds it up when necessary, nice song writing skills with darkness and intensity beneath the top layer. Three tracks with a certain sound and delivery that is IUGULATUS and varied enough to make a mark on the listener, this is a band I need to check further out. DEEP DESOLATION delivers dark and slow apocalyptic landscapes of doomy Black Metal, often more Doom than Black, quite repetitive and lacking intensity at times. There are some good doomy moments, though they collapse when the pace speeds a bit up, and on their own they doesn’t have enough punch. And the main riff in ‘Satanic Orgy’ is borrowed from CANDLEMASS, and the way it is used, doesn’t really bring the original respect. The band has some quite good ideas, though are not yet mature enough to bring them into life. Though with the ideas sported here, some good might be in wait. This is not the most inspiring release I’ve laid my ears upon, though it is quite funny to hear 3 bands from around the same area dealing within the same genres and how different it can be. Some of the music is mediocre and repetitive, but especially PRIMAL and IUGULATUS have some moments that set my hopes high for future releases from them. DEEP DESOLATION should also with some hard work be able to put out some more consisting music, than the 2 tracks on here. A nice little split CD with some interesting listens and introductions of 3, for me unknown, bands which should be able to make some noise in the future. Get further info from: www.reverbnation.com/theprimal, www.myspace.com/theprimalband, www.myspace.com/iugulatus, www.myspace.com/deepdesolationband, http://wydawnictwo-qev.pl