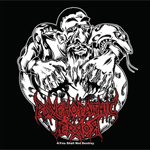 PSYCHOPATHIC TERROR
4: You Shall Not Destroy
(self-financed)
37:59min

I know I’m not always up to speed, so this time around I hadn’t realized that the mad Fin Petri Ilvespakka had been through a small change concerning the expression of his one man band PSYCHOPATHIC TERROR. The last time I had a listen to the band I was being hammered by some heavy Death / Thrash Metal, firmly rooted in the good old times. Nowadays a big deal of electronically produced Industrial has been thrown into the mix. And a mix it is, when things are rolling, like in my favorite tune on the album ‘Poisoned Food’, which is a old school Grindcore basher made really well, a really fitting trip down memory lane, induced with a good deal of aggression and intensity, and then, the Metal disappears and a programmed beat and some beeps and blops takes over, until the very end, where the insanely great riffing returns. The Grindcore parts of this album is awesome, and catches an old school atmosphere and intensity that reflects well upon the serious topics that the lyrics often deals with. Let’s take ‘Poisoned Food’ again, which is concerning GMO produce, which Petri doesn’t support, and I’m totally with him on that one. Though the Industrial elements, which in many ways often isn’t that Industrial sounding, though more in the vein of Ambient Techno, ruins the picture for me, they take away both atmosphere and intensity, and is not that well produced I think. The heavily distorted bass and clinical drums often works fine, though the bleeps and plops aren’t good for this record, the Grindcore is, the grim heavily reverbed growl is, the intensity that once in a while shows is, the atmosphere in the Grindcore parts is. Being different, for the sake of being different isn’t always a mean for the cause, as this record shows. A shame that the poor made techno parts ruins this album, as it seems to have a valid message to spread. A pure focus on the Grindcore or more dark Industrial in the vein of old TREPONEM PAL or G.G.F.H. would have made the album stronger, as displayed in ‘The Hidden Tyranny’, that works really well. The lighter techno parts just makes it too diffuse, and doesn’t always fit into the context that great. www.facebook.com/psychopathicterror