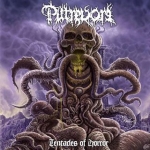 What happens when two of the busiest people of the whole Death Metal scene team up for a common project? Well, PUTREVORE happens. Looking at the two people who are PUTREVORE, there are just three possible reactions. You might either say: “Oh no! It’s Rogga again!” Mistake! Or maybe you think: “Damn, the next band with Dave Rotten. Who needs this?” Also a mistake! Or you might agree with this reaction: “Wow! Rogga Johansson and Dave Rotten in one band? This will be cool!” And this is very close to the truth! Even though, concerning all circumstances, PUTREVORE is a band that is absolutely impossible. Both Rogga and Dave are involved in so many projects, they seem to have a 36 hour day and still don’t find any time to relax or even sleep. But somehow they recorded two albums and a split EP during the last years. Now the third album of PUTREVORE, “Tentacles Of Horror” is available. With the support of drummer Brynar Helgetun, another jack of all trades, they laid down eight rotten pieces of brutal Death Metal. No frills, no dodges, no prisoners! Yet PUTREVORE are far from being dull or too simple, since they spice their raw assault with some breaks, lots of speed variations and a few melodies and harmonies that hint on the fact that Rogga is from Sweden. This mix makes listening to songs like ‘These Caverns Breed Filth’, both parts of ‘Gable Window Portal’ or the closing abscess ‘A Maw Surrounded By Tentacles’ a real rotten pleasure. All this is packed with a classical sounding production and another masterpiece of art by Juanjo Castellano. What else does a man of death need? With a furious: “The Rotten Crawls On!”, I recommend this album to the hordes of the putrid! Visit the band at www.facebook.com/putrevore or Mr. Rotten himself and his label at www.xtreemmusic.com