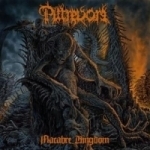 Please excuse if I’m not overwhelmed by ecstasy when Rogga Johansson is part of any kind of project since even though REVOLTING, PAGANIZER, THE GROTESQUERY, RIBSPREADER, BONE GNAWER etc. are definitely most of the time highly enjoyable and reliable deliverers of straight forward Death Metal, the amount of output he tends to throw at us produces not only killers but also some fillers in between, thus I can’t hide a certain skepticism when approaching PUTREVORE. BUT – capital letters, three times underlined – AVULSED mastermind and growl-monster extraordinaire Dave Rotten is part of this band, too, and blesses these eight tracks with maximum vocal sickness not unlike the guttural glory of Craig Pillard in his prime. On drums we have Brynjar Helgetun if I’m not mistaken who is also close with Rogga and while not getting all the way jazzy (God forbid!!!!) ensures blasts and grooves are well in place to rhythmically round off this mix between ROTTREVORE, early INCANTATION, old FUNEBRE and GRAVE. While I find the blasted sections somewhat unspectacular due to some not more than solid riffs lying underneath, the groovier sections sport a punishing HELLHAMMER / CELTIC FROST inspired heaviness and allow Dave to really shine in the vocal department thus a slower number like ‘Awaiting Awakening Again’ is definitely among my faves on this record. Also, PUTREVORE slay when adding a certain melodic flavor in some guitar passages (e.g. ‘Beyond Human Comprehension’) resulting in a captivating sinister atmosphere and the closing ‘Tattooed Skin Map’ is also a fine example on how well the duo can work out some catchy hooks despite all the murky, funereal brutality. Compared to the debut “Morphed From Deadbreath”, PUTREVORE’s second exhumation, sounds way more refined, convincingly arranged and totally crushing. If you loved the fabulous DISMA album you will find loads of pleasure when entering the “Macabre Kingdom”. Very well done, you rotten bros! www.putrevore.com, www.xtreemmusic.com, a sound sample can be found here.