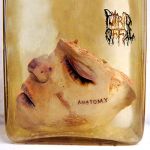 Never came across the word "offal", the dictionary told me that this term means carrion respectively "the parts of a butchered animal that are considered inedible by human beings". Bon appetit! But this EP is in no way inedible, at least not for a Grindcore fan. The main influence are bands like early CARCASS, early NAPALM DEATH and EXHUMED. Do not expect anything than grinding riffs, blast-beats all over the place and grunting (plus some interspersed shrieking). The band from France is active since 1991 (with a hiatus from 1994 to 2013) and besides some demos and a few split releases before the break "Anatomy" is just the third release and easily surpassing other Grindcore acts. Damn it, the guitar sound is old school to the maximum, sometimes it really feels like listening to a band back from the second half of the 1980s. Which means only riffs, blast and vocal insanity. The only problem I have is the fact two songs are re-recordings from the debut. Sorry, but re-recording from an album released two years ago, is well, kind of weird. The two live recordings are well-done, but only two new tracks is a bit meager. Since it is my first encounter with PUTRID OFFAL I like this EP very much, but if I have known them before I might would have been a little disappointed. www.facebook.com/putridoffal, www.xenokorp.com