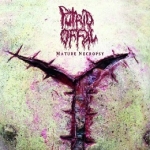 Once upon a time in the North-West of France a band called PUTRID OFFAL made some noise, it all started in 1991 and in the following years splits with promiment names as AGATHOCLES and SUPURATION were made, well a few other bands were also involved. Though no one that I’ve heard about, so let’s get back to those, when some of their material is released once again, which could be quite exciting. Though the lads in PUTRID OFFAL apparently grew bored of their Grindcore infused Death Metal, or the other way around, and took a turn towards Industrial Metal and eventually changed their name into M-PHERAL, a moniker which they released a full length album. That didn’t last as well, and they returned to their roots and this is where we are today. "Mature Necropsy" is the debut full length of this band, a band with around 24 years under the belt, if you count the inactive years as well, and no one really knows when and if the band really was inactive, as such. Though finally we have, together with a compilation of all the bands material prior to this date, entitled "Premature Necropsy" named after their side (and a track) of the split with EXCULCERATION from 1991, a full length album from the guys. The compilation is part of the first edition of this album as well (there are only 500 copies folks, so be quick, or you have to buy 2 releases, to get the same material). And when we are at the same material, "Mature Necropsy" consists of the band’s old material, re-written and re-recorded. If you want a spanking new track from the lads, you have to get hold of the "Suffering" EP from last year, to listen to ‘Livor Mortis’. Old wine in a new bottle is perhaps a fitting description here, that said, I do indulge on quite some old wine, as most things here in life has to settle, before it really becomes good. It fits quite well on PUTRID OFFAL, as their youthful attack of Goregrind has the aggressiveness and freshness that such needs, though not that much finesse. The improved flow in the songs, the quite better production and the subtle aggression and all out intensity, really fits the band, which we all have in the re-written and -re-recorded tracks. Great to hear how their roots and old tunes have evolved into a nowadays sounding band, which quite shows that PUTRID OFFAL were ahead of their time back in 1991, when most of it happened. Many newer bands can be heard in the music, also quite prominent ones, and if Goregrind and aggressive Death Metal is up your alley, this album can’t be overlooked, as much of what happened in more Death Metal oriented Grindcore and Goregrind is found within these tunes. A nice walk through of what made this genre great, I’m a fan. Check them out at: www.facebook.com/putridoffal and www.kaotoxin.com