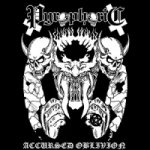 Are demos back on the line of development for a band? I really hope so. Although the tape format has suffered the most in recent times, it seems a few ones have the valor to still release demo tapes as it was the rules of the old school. PYROPHORIC from Mexico released this, their second demo, of some weird and psychotic type of Death Metal with a few old school Black Metal touches, that gives them a more South American sound in the realms of early SEPULTURA, and some older SODOM, with a raw recording, which is still quite good for a demo. The tape, which comes in a nice glossy pro-printed cover, states that this is a one man band. The drums, done by some sort of drum machine, takes away a bit of emotion, and also makes the overall sound to have that synthetic feeling which is not exactly appropriate for the music. The guitar tone has a very weird sound, but this fits quite good into the demo aura of this project. There are a few parts that use some very strong noise / industrial effects / sounds, especially in the intro and outro, making this even more chaotic. The final result is interesting, yet I feel it fails in a few areas. But let’s remember that this is a demo, which marks that this is still a development stage for the band, which if refined and probably uses later a full line-up, with a human drummer, it can really project them to higher levels. It can be heard here that the guitar player knows his game. And more than once it reminded me to early 90s Death Metal demos that were floating around, so in this the nostalgia factor was right on. www.myspace.com/pyrophoric666, tapethereaperrecs.blogspot.com