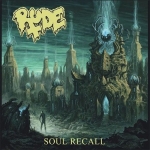 The debut album of RUDE from Berkeley, California is accompanied by good omens: released on F.D.A. Records, cover design by Dan Seagrave – two damn fine premises for a real great album. And the first notes of ‘Haunted’ confirm anything I expected, since they pretty much remind me of the early works of MORBID ANGEL. But as soon as the vocals of Yusef Wallace set in, the road leads to the old world. Might these be some long lost PESTILENCE recordings from times when Martin van Drunen still was singing in that band? Nope, this is not Mr. van Drunen, although Mr. Wallace sounds exactly like him. But early PESTILENCE are not the worst reference to describe the sound of RUDE. Like the Dutch pioneers back then, RUDE have a lot of Thrash influences in their sound, some of them even hinting at more unknown bands like AT WAR. Just listen to songs like ‘Memorial’ or ‘Forsaker’ to find these roots. The title of the latter was a moniker the band used for a year in between, when they were out as a pure Thrash Metal band, by the way. With the long, nearly epic ‘Conjuring Of Fates’, RUDE even have an almost pure Thrash song on “Soul Recall”, a song with a lengthy instrumental introduction and lots of breaks that somehow reminded me of those Thrash latebloomer bands like ATROPHY or ACROPHET. But despite those sometimes pretty cool excursions, RUDE sound best when they concentrate on the Death Metal side of their sound. Songs like the already mentioned opener ‘Haunted’ or ‘In Thy Name’ refer to the early work of bands like MALEVOLENT CREATION, spiced with these already mentioned vocals. And I have no problems with these vocals, since I always was a fan of Martin van Drunen. Add a rude production (Hargh Hargh!) that sounds old fashioned enough to fit to the sound of RUDE and you have a clue what to expect from “Soul Recall”. It might not be one of the best albums that came out on F.D.A., but it’s a good one anyway, with highlights and lots of interesting moments. So check the band at: www.facebook.com/pages/rude/391039200987363 and the label at www.fda-records.com