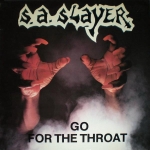 There was a time when 2 SLAYER’s were living side by side. As a magickal coincidence, both bands played a quite very similar style and had a quite occult-themed approach in their early stages, alas before releasing anything on a label. But the devil’s work is mysterious thus one of those bands maintained their style, while the other developed into a faster, deadlier and darker approach. Yes, the one that embraced more the devil and thus used the most aggression became bigger and had to force the other to change its name. But they just added the S.A. to their name, which by the way refers to their native city in San Antonio, Texas. Oddly enough both bands played once together! So, we have here the only album S.A.SLAYER released and their debut MLP they did when they were not using the S.A. yet. And, that my friends, dates back to 1983, whilst their debut album wasn’t released until 1988 (it was already recorded in 1984 though – Frank). So, if you have never felt the rage of the slayer, let me tell you that they play a dark, heavy style of Speed Metal with some minor touches of early Thrash. I can hear some MERCYFUL FATE touches, as well as some early VENOM, with some IRON MAIDEN touches in some twin guitar attacks. The vocals, done by the late Steve Cooper, where bordering between melodic high pitched screams, falsetto included, that at times transports you to the 70s era of Heavy Metal bands like DEEP PURPLE. They maintain the occult themed vibe with songs like ‘If You Want Evil’ and ‘Hell Will Be Thy Name’. The production values are quite good for the time being, although the vocals sound a bit high on the overall product, and the guitars could be louder, but then again they have that touch that recalls a time long lost. As a matter of mythic fact, sometimes the songs tend to remind of the other SLAYER in their more laid back songs from “Show No Mercy” although more melodic. So, well over 20 years later, their legacy is still there to be discovered by Metal fans (for the first time ever, officially released on CD now! – Frank), and it still stands as a very solid piece of Metal. After the band dissolved, many band members ended playing in other bands like RIOT, MACHINE HEAD, JUGGERNAUT and SACRED REICH. I just keep wondering if this SLAYER had released their MLP before the other SLAYER what would have happened. But then again the dark one does its work in ways we mere mortals can only watch… or it is just luck at all and the horned one is just a goat on a cover art laughing as it eternally rots. This one brings great memories and after all this time, it still sounds as metallic as it was intended. And that cover art, surely deserves a place in the best covers in Metal history. Now, with this re-edition, it is your time to grab this one. Break that throat! www.skolrecords.com