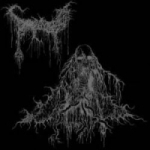 With the deluge of dark and occult Death Metal growing more intense by the day, it is refreshing to find a band that adheres to a simple philosophy of a pure indulgence in death and sickness. Having released an extraordinarily competent demo last year on Detest Records, Finland’s SWALLOWED have moved forward in their morbid exploration. While the demo was undeniably good, it nonetheless left room for improvement in the band’s sound. With the release of this self-titled EP on Emptiness Records, SWALLOWED have lived up to their potential demonstrated their heightened ability. Still diving deep into the same murky sewage of sickness as bands like AUTOPSY (their most potent influence), SWALLOWED’s focus on this EP is on refining their sound rather than breaking new barriers. The 3 songs on this release are almost entirely slow, doom drenched affairs. SWALLOWED rarely play fast on this recording. In fact, the fastest moment on the EP is the spastic opening riff which quickly gives way to the punishing doom that constitutes the majority of the track. The second and third tracks descend even further with the final song on the EP, ‘The Dying Misted In The Bloodstream’, crawling so slow that the track almost collapses on itself before briefly opening up into a frenzy of carnage. SWALLOWED prove that they are masters of both repetition and transition on this EP. They consistently indulge in a riff almost to the point of staleness. But just at the moment when it feels they are going too far, SWALLOWED change directions and the listener is jolted back into their demented universe. The songs are not complex by any means, but exhibit a thorough understanding of the use of temporal shifts and well-placed transitions to build tension in the composition. The band forgoes any reliance on guitar solos on this recording which actually enriches the depth of the sound here. While it may be questionable whether SWALLOWED’s style can adequately maintain the attention of the listener throughout a full-length release, their horrific assault is perfectly suited for a 7" release such as this one. And although I found myself listening to it repeatedly, it seems that the band would want to explore more ways of diversifying their sound before undertaking to record an entire album. Ultimately, there is little more one can desire from this release. www.myspace.com/swalloweddeath, emptiness.anepitaph.com