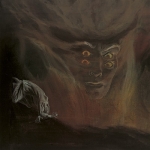 If someone would have passed me this release without any information on the band, I would never ever recognized that this is the same band that once released two demos in the vein of classical Scandinavian old school Death Metal some years ago. "Lunarterial" is everything else, but for sure it is not your average Metal of Death. These Finnish dudes morphed into one nasty and mean aural nightmare, that transcendental voyage through the darkest and deepest abyss of your soul, a death grip that hardly ever sets you free again and leaves you totally deranged in the end. To make a long story short, "Lunarterial" consists of cornerstones like absolute tremolo riff mayhem, insane blasting eruptions, mid-paced sequences and utterly filthy crawling doom. A guitar tone cavernously tuned down and that harsh, suffering vocals, with a slight reverb, sounding like tortured moans from the innermost depths of hell. SWALLOWED created an album filled with so much energy, that you feel the endless void and desperation with each and every note. Definitely not for the weak, this is heavy and intense as fuck and kinda hard to digest after the first spin. Honestly, when I put "Lunarterial" on my turntable for the first time and ‘Reverence Through Darkness’ came crawling through my speakers with its first tones, I was not quite sure if I would give it a second round. It absolutely needs time to unfold, to show its entire ugliness. Without taking notice you get addicted and fall victim to this Finnish monster. Favorite tracks would be ‘Arterial Mists Of Doom’ and ‘Black Phlegm’. Last mentioned is reminiscent of MINDROT, whilst the whole album compresses the relentless savagery of ABYSSAL (UK) and TEITANBLOOD, the sickness of AUTOPSY and the gloomy and dense atmosphere of DISEMBOWELMENT, to stir you up with the feeling of being mentally abused. That devastating chaos will be closed with the 25(!) minutes lasting monolith ‘Libations’ which also incorporates heavy drug-influenced psychedelic elements that even makes acts akin ELECTRIC WIZARD gonna sound like a prom night band. Pure nihilism and the perfect soundtrack for your darkest hour. One of the surprises in 2015 and contender for the throne of mind raping and sickening art. Perkele!! www.facebook.com/pages/swallowed/182683111776451, www.darkdescentrecords.com