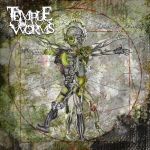 The TEMPLE OF WORMS is a pretty rotten temple located in the French city of Lyon. Yet it is not quite clear what ancient deity was worshipped in there. Obviously it’s the god of Death Metal, yet also the god of Thrash Metal gets his praise at this temple and even the god of the D-Beat receives his ovations. Now, seriously, folks – the first full length album from TEMPLE OF WORMS is a surprisingly fine album for all those who like their Death Metal raw and really diversified with a decent touch of AUTOPSY. The beat on “Liber De Morbis” ranges from rotten grooves to raging blast beats, the vocal delivery is really as chequered as grunt and squeals can be and the French really know how to write some killer stuff with clever breaks. Furthermore the production is dense, rough and unpolished, this helps songs like the killing ‘Cystic Fibrosis’ or the monstrosity ‘Yersinia Pestis’ to gain the intensity they need. And even though these two songs might be worth a special mention it’s the whole album that deserves your attention. Of course TEMPLE OF WORMS didn’t reinvent the wheel with this album, but they surely know who to make the wheel run. More TEMPLE OF WORMS info at: www.facebook.com/templeofworms, label contact: www.facebook.com/greatdanerecords