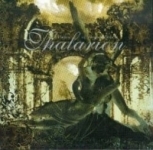 Dark Metal veterans THALARION are back with quite a strong album called "Tunes Of Despondency". The record starts off with quite an unusual, happy SweDeath riff, keyboards ‘n’ stuff, y’know. But quickly gets much darker, sometimes reminding me a little of old AMORPHIS. The second song, ‘My Bitter Overstrain’ features an acoustic intro and keeps getting darker, heavier and faster. The fast parts aren’t too impressive, though. On the other hand they’re acceptable as a means of contrast. After approx. 3 minutes of that song Nela Horvathova, the new female singer, starts contributing to the album.Unfortunately she leaves a rather unpleasant first impression, sounding a bit like cheap gothic. Later on her parts are getting much better and at ‘A Tatrastream Romance’ she even reminds me quite a bit of THE GATHERING’s Anneke – not for the last time. If she continues working on her vocals we might expect great moments. Talking about ‘Tatrastream…’ that’s one of my favorites on here. It’s full of emotions, moving quiet moments and when Juraj adds those sick suffering vocals one might lose his mind as well. "Tunes…" lives from mood changes and takes you on a journey through the soul. For those who can live with the somewhat gothic touch (early THEATRE OF TRAGEDY) or the saxophone on ‘My Weakness’ and ‘Confined’ (I usually hate saxophones but somehow it fits on here) you’ll discover an album (and a band) that’s far too good to be ignored! thalarion.cjb.net/